The net sales for the first half year totalled ¥804M (¥709M in the same period a year ago). The income in this period is primarily based on milestone revenue from Novartis triggered by NVA237 filing for marketing authorisation with the European Medicines Agency (EMA), and sales of NorLevo® (emergency contraceptive) in Japan and Australia.

Cost of Goods Sold (COGS) increased to ¥194M from ¥49M in the previous year due to the increase in sales of NorLevo® in Japan.

Progress of product development and other activities during the 2Q ended 30 September 2011 include:

NorLevo®, the first emergency contraceptive launched in Japan and is being distributed through ASKA Pharmaceutical distribution network.

NVA237 is a dry powder formulation for inhalation of glycopyrronium bromide, a long-acting muscarinic antagonist (LAMA) with a rapid onset of activity.

NVA237 was licensed to Novartis in April 2005 by Sosei and our codevelopment partner, Vectura Group. Novartis intends to launch NVA237 as a once-daily monotherapy for COPD in 2012 and as a combination (QVA149) with its once-daily LABA, indacaterol, in some territories in 2013.

In September 2011, Novartis filed NVA237 for marketing authorisation with the European Medicines Agency (EMA) under the brand-name Seebri® Breezhaler®, triggering a $5M milestone payment to Sosei.

The GLOW1 study met its primary endpoint by showing that NVA237 50 mcg once-daily produced a significant improvement in lung function of 108 ml in trough FEV1 (forced expiratory volume of breath in one second) after 12 weeks in patients with moderate-to-severe COPD compared to placebo (p<0.001). Moreover, NVA237 had a rapid onset of action, with a 93 ml improvement in FEV1 compared to placebo at five minutes after the first dose (p<0.001).

Both studies showed that NVA237 was well-tolerated, with a similar incidence of adverse events for patients treated with NVA237 and placebo.

In October, Novartis announced that in the US, NVA237 will require additional clinical data to support submission. They confirmed that, as a result of questions from the FDA, they were exploring the dosing regimen of the product.

The change to the timing of US NDA of NVA237 is likely to impact timing of the NDA submission for QVA149 in the US, though we continue to believe that QVA149 could be the first once-daily LABA/LAMA combination therapy on the market for COPD. The dual activity of a beta-adrenergic agonist (beta2agonist) and a muscarinic antagonist could result in a potent bronchodilator with convenient once-daily dosing. This would address a large and unmet need for COPD sufferers where patient compliance is a key consideration.

Novartis commenced Phase III studies with QVA149 in May 2010, triggering a $7.5M milestone payment to Sosei. Novartis expects to present Phase III data at a major respiratory conference in the second half of 2012 and to file the product in Europe and the rest of the world the same year. The first product launch is expected in 2013.

To date, Sosei has received $35M from Novartis and, under the terms of the licence, could receive up to an additional $152.5M for achievement of regulatory and commercialisation targets for both the monotherapy and combination product. In addition, royalties will be received on product sales in the event of successful product launches.

Sosei Group’s 100% subsidiary, Activus Pharma entered into a Joint Development Agreement with Toa Pharmaceuticals and its subsidiary Nitto Medic. Under the terms of the agreement, both sides will jointly conduct research and development to assess the feasibility of developing various ophthalmic solutions applying APNT. Once a product has been identified for development, a separate agreement towards commercialization will be executed.

Also, Activus was awarded a grant from the New Energy and Industrial Technology Development Organization (NEDO), an Incorporated Administrative Agency under the Ministry of Economy, Trade and Industry (METI) as a part of their FY2011 Innovation Promotion Programme. Using Activus Pure Nano-particle Technology (APNT) and surface-modified nanoparticle technology, Activus is focusing on development of high valueadded products that would solve the problems existing formulations are facing. To explore the potential of APNT in treatment of ophthalmic diseases, Activus has signed a collaboration agreement with Gifu Pharmaceutical University and is now working on the development of novel posterior eye segment medication. Posterior eye segment disease such as diabetic retinopathy and age-related maculopathy is the primary cause of blindness and other visual impairments in middle age. An effective and easy-to-use medication has still not been invented, and the development of an innovative treatment is anticipated.

Sosei Group’s wholly owned Japanese subsidiary, Sosei Co., Ltd. acquired development and commercialization rights to Loramyc® (development code: SO-1105) in Japan from BioAlliance Pharma. Loramyc® is an antifungal agent, administered as a muco-adhesive buccal tablet for the treatment of oropharyngeal candidiasis in immunocompromised patients. Loramyc® has been registered in 26 European countries, in South Korea, and the United States. Clinical studies are expected to commence in Q4 2011 fiscal year. 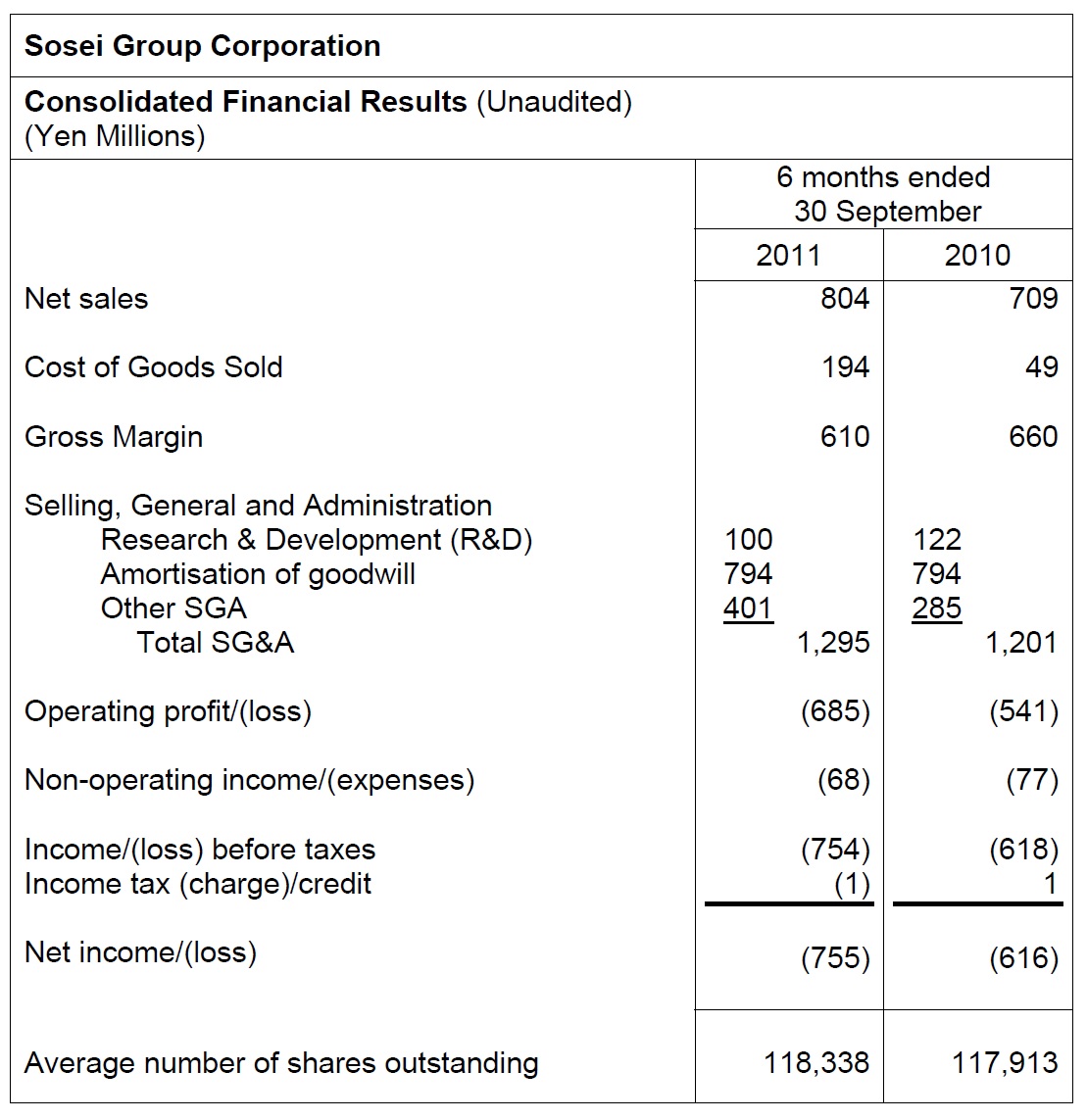 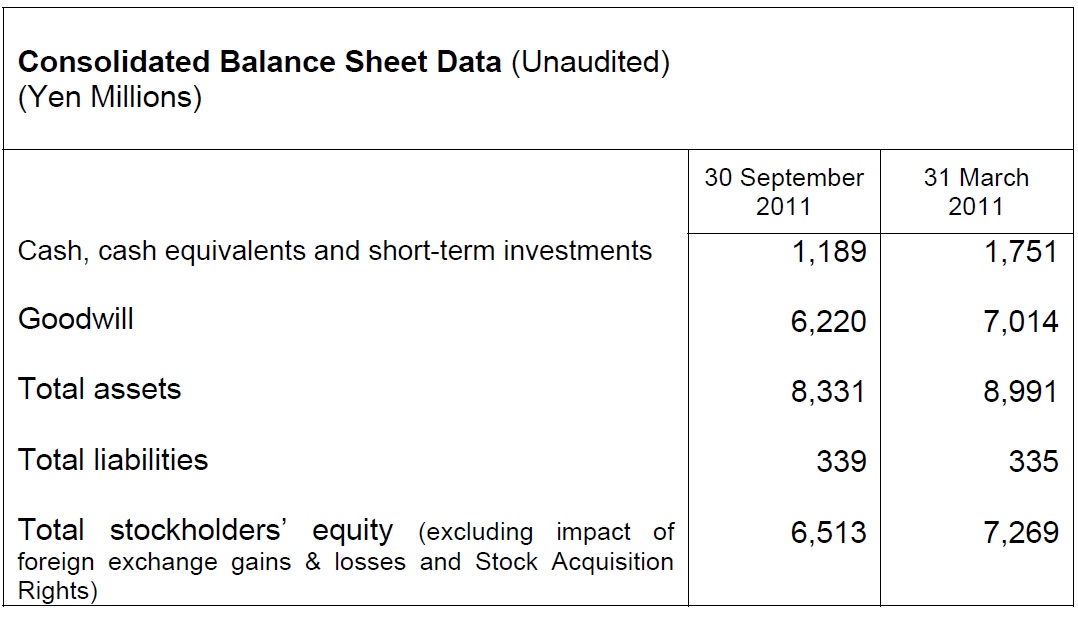 The financial forecast for the year ending 31 March 2012 was revised downward, mainly due to the expected delay of the milestone payment related to NVA237 filing in the US and currency fluctuations.