During the last three months the following progress has been made:
The details of these activities are described below along with a revision to the Company’s financial forecast.
Product Discovery – Integration and New Product Nomination
A major goal of the acquisition was to ensure sustainability of the Development Pipeline through in-house Product Discovery. The Company’s Product Discovery capabilities have now been fully integrated and all activities directed towards a lower risk approach based upon identifying new uses for existing drugs and drug templates – referred to as Drug Reprofiling. Within the Sosei’s Drug Reprofiling Platforms (DRP), two types of opportunity are considered
A major achievement for the integrated Product Discovery group has been the nomination of SD726 in to the Development Pipeline. SD726 is a serotonin noradrenaline reuptake inhibitor (SNRi) for the treatment of chronic low back pain. This condition provides a major unmet medical need because it is insufficiently treated with NSAIDs and is not commonly viewed by physicians as justifying opioid therapy due to their associated side effect burden. This issue has been exacerbated due to the issues associated with COX 2 inhibitors that had previously been used in this condition.
SD726 is a New Molecular Entity (NME) that has been designed by chemically modifying a known drug template of a marketed drug and positioned in a completely different indication to the parent product. This approach has the clear advantages of creating strong NME intellectual property, whilst still being able to leverage the lower risk approach of a drug which is, structurally, closely related to an already safe and registered product. SD726 has completed extensive preclinical evaluation, demonstrating excellent analgesic efficacy. SD726 is currently undergoing regulatory preclinical development with the aim of initiating Phase I clinical studies in 2007.
Sosei’s Product Discovery capability has generated the majority of its Development Pipeline to date. It is anticipated that it will continue to do so using the lower risk model that has been so successful, ultimately helping the Company to build a sustainable pharmaceutical business.

Results of Portfolio Review
At acquisition, the combined companies had a joint pipeline of sixteen product opportunities at various stages of both research and development. These have subsequently been prioritised in order to focus resource on a robust, regulatory Development Pipeline, comprising ten of the original projects and the new nomination, SD726, referred to above. 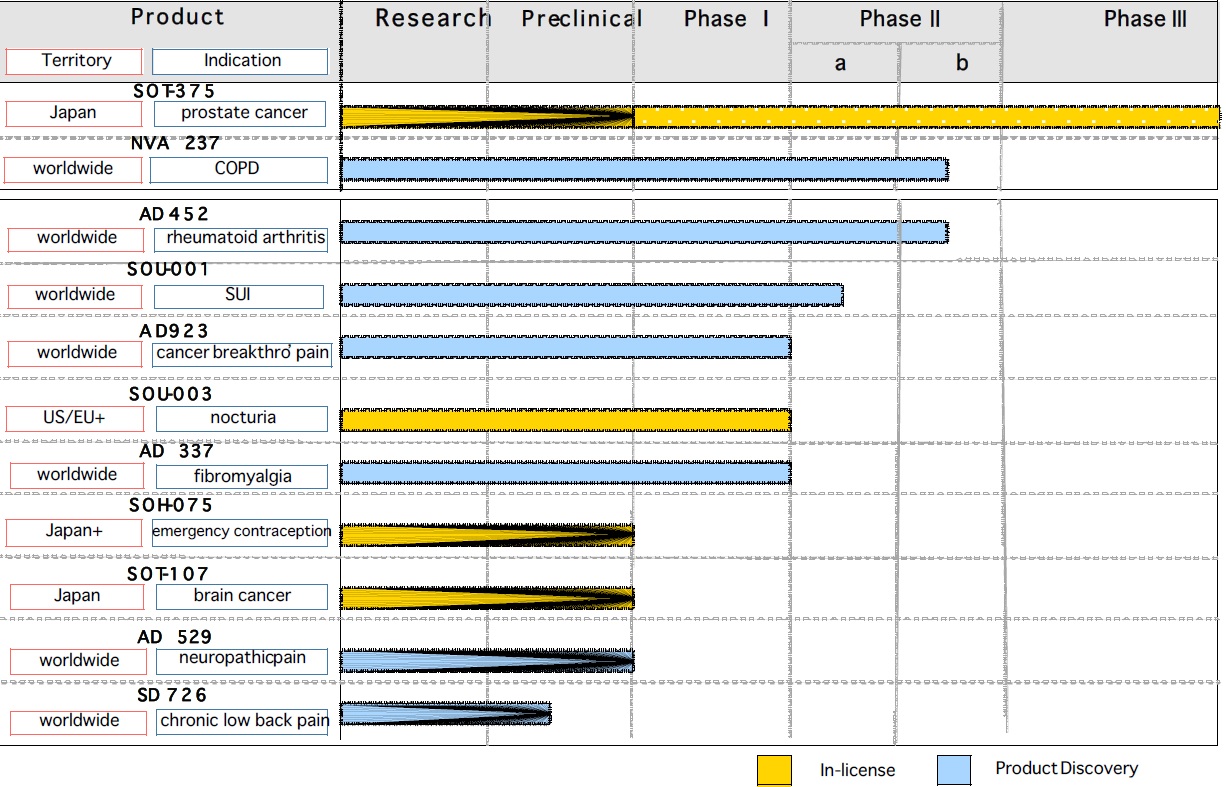 The six programmes not prioritised into the full regulatory Development Pipeline are being further reviewed in the light of the many Product Discovery assets the newly combined group has available to it.

Key Updates from the Development Pipeline

Eligard – is a long acting formulation of the LHRH agonist leuprorelin. Sosei submitted its application for the regulatory approval of Eligard as a generic product in February 2005 to the Japanese Ministry of Health, Labour and Welfare (MHLW) following discussions with them. The Japanese Pharmaceuticals and Medical Devices Agency (J-PMDA: Extra-departmental organisation of the MHLW) is reviewing the application and further discussions are ongoing as to the classification of the regulatory application for Eligard since they have a difference in perspective as outlined below:

Although the discussion with J-PMDA continues, it is Sosei’s belief that it will not now receive approval of Eligard as a generic product by March 31 2006 as planned and it will not therefore receive its marketing authorisation milestone in Fiscal Year 2005.
NVA237 (formerly referred to as AD 237) is a novel, inhaled, once daily, long acting muscarinic antagonist (LAMA) for the treatment of chronic obstructive pulmonary disease (COPD). The current market for COPD drug therapy is estimated to be worth $4 billion per annum and is predicted to grow to $10 billion by 2010.
NVA237 is being developed and commercialised by Novartis, at its sole cost, both as a monotherapy and in combination with their once daily long acting beta agonist (LABA) indacaterol (QAB149). Under the terms of the agreement signed in April 2005, Sosei and its development partner Vectura, each received an initial payment of $15 million upon signing the deal and can receive total milestone payments of up to $375 million and royalties on future product sales.
In October 2005, a Phase IIb multiple dose-ranging clinical trial was initiated. The study is a randomised, double-blind, multi-centre, placebo-controlled trial designed to evaluate the efficacy, safety and dose response of NVA237 in patients diagnosed with COPD over a four week period.
NVA237 was identified using Sosei’s Drug Reprofiling Platform. As a consequence, the Novartis deal validates the Company’s low risk business model and Product Discovery capabilities. In particular, the deal demonstrates Sosei’s ability to identify and develop commercially attractive products to a standard that is sufficient to attract major pharmaceutical companies upon favourable commercial terms.
AD 452 – is a novel, small molecule, disease modifying anti-rheumatic drug (DMARD), designed to reduce joint inflammation and destruction, pain, and preserve mobility in rheumatoid arthritis (RA). The market for RA drugs is currently worth $5.5 billion and is forecast to almost double to $10.5 billion by 2008.
In September 2005 a Phase IIb dose ranging study was initiated. The study is a randomised, multi-centre, double blind, placebo controlled 12 week trial designed to evaluate the efficacy and safety of AD 452 on a background of methotrexate in patients with active RA. A total of at least 292 patients in four treatment groups will be enrolled at study centres in Europe and the USA. Efficacy will be assessed using ACR 20 and DAS 28. The trial is being undertaken under US and EU regulatory authorisations and will take approximately one year to complete.
AD 452 is a clear demonstration of the Company’s new international development and regulatory capabilities. The ability to develop products worldwide, and in particular in Western pharmaceutical markets, was a key factor in Sosei’s acquisition of Arakis.
SOU-001 – is an oral tablet under investigation for stress urinary incontinence. Phase IIa studies are currently in process however, patient recruitment has been slow. Therefore, it is not considered feasible that a licensing deal can be concluded by March 31 2006.
All other projects within the Company’s Development Pipeline remain on track.
Revised Financial Forecast Fiscal Year 2005
Due to the uncertain nature of drug development inherent in the biopharmaceutical sector, Sosei has provided sales and profit expectations in ranges for this fiscal year. The Company is now expecting its results for Fiscal Year 2005 to be at the bottom of the range it has forecast to date.
The following adjustments have been made to the financial forecast for year ending March 2006. 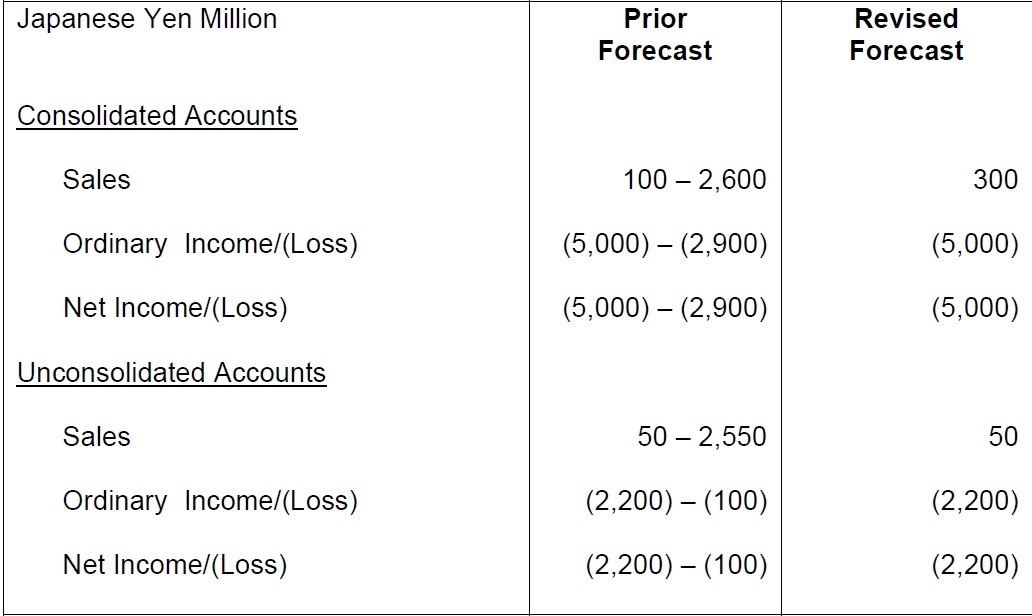 Reasons for Revision:
Following the portfolio review outlined above, we consider:
1) the possibility of acquiring Marketing Authorisation of Eligard during the current period has been reduced and thus we reduce the forecasted milestone from Sales and reduce its research cost.
2) the likelihood of out-licensing SOU-001 during the current period has been significantly reduced and therefore the receipt of a forecasted initial payment has now been removed from the latest forecast.